FISD was found in July 2011 with the aim of working towards social development by tackling issues considered as leading contributors to widespread poverty and poor living conditions, namely the harm caused by alcohol, tobacco, and drugs, the prevalence of gender based violence, and the abuse and neglect of child rights. Based on the core values of innovation, justice, and equity, FISD strives towards engaging people of diverse social, cultural, and ethnic backgrounds. FISD works at community, district and national level and is present in six districts in Sri Lanka namely the Anuradhapura, Matale, Gampaha, Colombo, Moneragala, and Hambantota districts.

‘Be the Change’ – FISD National Campaign to engage men and boys in prevention of Gender Based Violence.

‘Be the Change’ was launched as a campaign aimed at changing minds and behaviors of men and boys towards challenging masculinity and femininity . It was designed in a way that not only men and boys but anyone willing to challenge traditional masculinity and femininity can identify themselves with it. The ‘Be the change’ campaign allows men and boys to identity with the campaign ideology and provides opportunities to become involved, while creating a sense of investment at individual, family, community and national level.

The Be the Change campaign’s main framework was developed simultaneously with FISD’s other social development programmes, working with men and in particular focused on questioning the role of the man as a partner, a husband, and a father and on developing this role to be more effective taking factors such as gender equity into account.

Goals and Objectives of ‘Be the Change’ 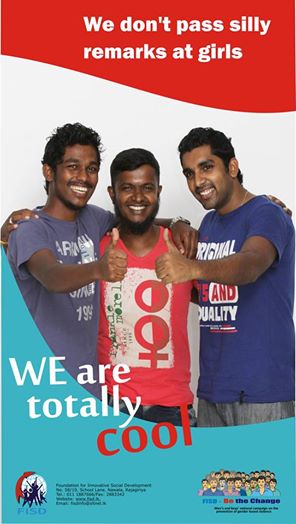 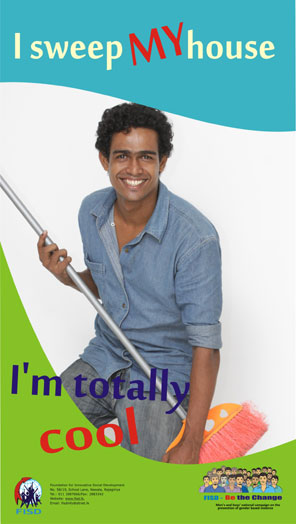 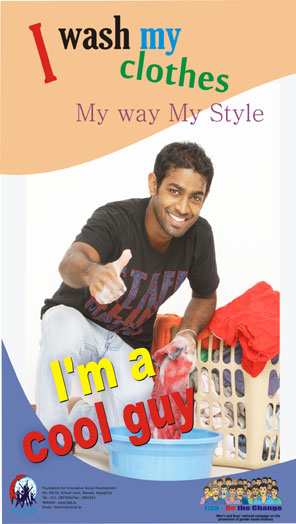 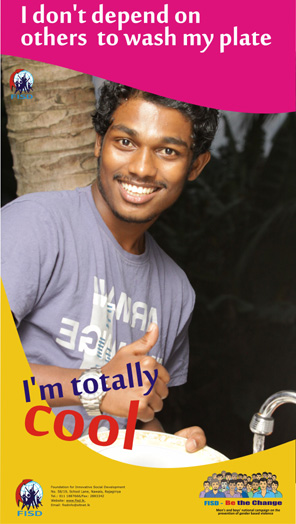 Activities conducted through the ‘Be the Change’ Campaign at community, district, and national level include the formation of fifteen-member men groups in each of the villages in FISD’s six programme districts, awareness campaigns at community , divisional and the national levels. At community the campaigns range from door to door visits through the FISD CBOs to awareness through posters, stickers, dramas, and entertainment programs. The district committees of men were established in the Moneragala, Hambantota, and Matale districts where the committee leaders took the responsibility of conducting awareness programs and motivational activities in selected settings where men gather for different reasons (eg. Paseant societies, funeral fund societies, CBOs, transport societies etc.) Other activities conducted through Be the Change include the formation of Youth Committees, the conducting of awareness programmes at institutions that promote masculinity such as the national armed forces, and dissemination of men engage awareness materials and formation of men groups towards challenging masculinity through the FISD national women network of likeminded organizations covering various parts of the contry. Training programmes on gender equity were also conducted in these organizations’ working locations and men resource teams were formed with the collaboration of these organizations.

Prior to the launching of Be the Change, programmes conducted with youth under FISD’s Gender Based Violence (GBV) programme include programs aimed at changing gender stereotypical attitudes and behaviours of youth ( e.g. Fun Kitchen cooking program for boys). These attractive activities and some of the related campaigns ( I am a Cool Guy Campaign) aimed at promoting an alternate image of masculinity that helped boys to deal with unidentified losses and negative effects of masculine culture. Workshops are also being conducted for youth in private and government educational institutes, universities and private companies where youth employment is high. Training programmes and workshops are conducted mostly in camp settings where youth have positive and effective engagement and where boys have an opportunity to deal masculinity within peer groups.

The establishment of FISD – Civil Society Organizations (CSOs) is the culmination of the programmes that have been conducted in the communities up to the present. The establishment of CSOs aims at creating and strengthening a Civil Society within the village that is able to continue with the programmes introduced by FISD thereby ensuring the sustainability of the programmes. A total of 90 CSOs have been initiated at present and capacity building programmes to develop the ability of members to work in five selected areas of social development: alcohol and drug prevention, child rights protection and promotion, gender and development, democracy and good governance, and protection of the environment through social change and advocacy. Engaging men and challenging masculinity and making of men in alternate roles is embedded in all of these selected areas of work within the CSO.